FREE SHAKESPEARE IN THE PARK We are proud to announce a special summer celebrating 60 years — and more than 150 productions — of Free Shakespeare in the Park at The Delacorte Theater in Central Park.

Adapted by Shaina Taub and Laurie Woolery, Public Works' joyful, community enriched, musical adaptation of AS YOU LIKE IT returns this summer. This heartwarming musical will close out our celebratory season, and features music and lyrics by Shaina Taub, choreography by Sonya Tayeh, and direction by Laurie Woolery.

Tony Award nominee Robert O’Hara (Slave Play, The Public’s Barbecue) brings his sharp wit and story-telling genius to The Delacorte with a bold new production of RICHARD III. One of Shakespeare’s most indelible villains, Richard is determined to be King. Following his lust for power and the throne, he manipulates, kidnaps, and kills all who stand between him and his throne, using brilliant words and dark charm to conceal his dismantling of government and justice. This masterful dive into the muddy middle between political genius and violent power grab will open Free Shakespeare in the Park’s 60th Season with piercing relevancy and electrifying drama.

To complete this anniversary season, Public Works’ acclaimed musical production of AS YOU LIKE IT returns to Central Park, bringing together its diverse ensemble of both professional actors and community members from across New York. Adapted by Shaina Taub and Director of Public Works Laurie Woolery, featuring music and lyrics by Taub, this ambitious work of participatory theater has been hailed as “thrilling & terrifically vital” by The New York Times. Forced from their homes, Orlando, Duke Senior, his daughter Rosalind, and niece Celia are banished to the Forest of Arden. There, they discover a community of acceptance and transformational love, where all are welcomed and embraced. Laurie Woolery directs this magical adaptation of a beloved classic. Join for Free Shakespeare in the Park’s 60th birthday party, celebrating six decades of free Shakespeare for all New Yorkers, and toasting the many decades to come!

We are excited to announce our planned return to in-person distributions for free tickets this summer, and the return of TodayTix as our official digital lottery provider for Free Shakespeare in the Park.

MAKE A GIFT & RESERVE A SEAT.

Want to reserve your seat to New York’s favorite summer tradition? Become a Supporter Plus with a gift of $300 or more and you’ll have access to reserved seating at The Delacorte Theater in Central Park. You’ll also be contributing to a 60-year legacy of providing millions of free tickets to New Yorkers.

*Please note, reserved seating for a donation is limited in order to continue to keep the majority of tickets to Free Shakespeare in the Park accessible to all.

Make a gift today to celebrate the 60th year of Free Shakespeare in the Park. 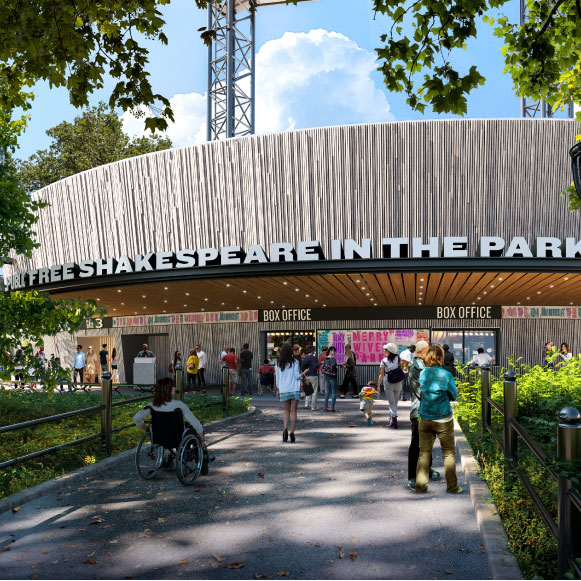 How to Access Tickets to Free Shakespeare in the Park 2022

Pictured Above: The company of the Free Shakespeare in the Park production of MUCH ADO ABOUT NOTHING. Photo by Joan Marcus.