It’s time. The Public’s flagship home at Astor Place is filling up once again with people, music, art, and conversation. Join in and be a part of this anticipated new season and celebrate in bringing all The Public’s spaces back to life.

But that's not all. Nightly music returns to Joe’s Pub. The Mobile Unit returns to all five boroughs with free performances, and we welcome back our annual Under the Radar Festival.

Become a Public Theater Partner or Supporter and take advantage of Priority Access periods, savings on tickets, and a host of other benefits.

As we return, we all must play our part around Health and Safety. Learn more with Safe at The Public. With heart, humor, and lush new songs, Pulitzer Prize and Tony-winning team Tom Kitt and Brian Yorkey and Kwame Kwei-Armah bring their soul-stirring new musical based on the acclaimed independent film, THE VISITOR by Thomas McCarthy, to The Public for its World Premiere. PLAYS FOR THE PLAGUE YEAR

On March 13, 2020, as theaters shut their doors and so many of us went into lockdown, celebrated playwright Suzan-Lori Parks picked up her pen and set out to write a play every day. What emerged is a breathtaking chronicle of our collective experience throughout the troubling days and nights that followed. Acclaimed theater artist Daniel Alexander Jones’ latest work, ALTAR NO. 1 – ATEN uses our solar system as both metaphor and method for an immersive journey through the celestial, within and without. UNDER THE RADAR FESTIVAL

January 2022 will bring a fully live in-person Under the Radar Festival back to The Public. A highlight of the festival will be performances by the Devised Theater Working Group, who have been developing projects for the past two years. The Public and The National Asian American Theatre Company (NAATCO) join forces in presenting OUT OF TIME, a collection of brand-new monologues by five award-winning Asian American playwrights, performed by an ensemble of actors all over the age of 60. By Lloyd Suh
The Barrington Stage Company and Ma-Yi Theater Company Production
Directed by Ralph B. Peña
Presented by The Public Theater

Inspired by the true story of the first Chinese woman to step foot in America, Lloyd Suh’s critically-acclaimed play, THE CHINESE LADY, is a tale of dark poetic whimsy and a unique portrait of the United States as seen through the eyes of a young Chinese girl. A musical event one hundred years in the making, SUFFS brings to life a complicated chapter in the ongoing battle for the right to vote: the American women’s suffrage movement. Mona Mansour, award-winning playwright and alumna of The Public’s Emerging Writers Group, delves into the Palestinian struggle for home and identity in THE VAGRANT TRILOGY, a single epic story told in three parts. Critically-acclaimed playwright James Ijames reinvents Shakespeare’s masterpiece with his new drama, FAT HAM. Juicy is a queer, Southern college kid, already grappling with some serious questions of identity, when the ghost of his father shows up in their backyard, demanding that Juicy avenge his murder. Joe's Pub reopens this fall, ushering in the return of the best in live music and performance to NYC. With multi-night runs on Tuesdays-Saturdays and shows nightly on Sundays and Mondays, the dynamic season line-up will kick off on Tuesday, October 5 with Justin Vivian Bond and The Illustrious Blacks. Laurie Anderson’s Vanguard Award and Residency will be extended through summer 2022, as will the current cohort of the Joe’s Pub Working Group, which includes Salty Brine, Sarah Elizabeth Charles, Jaime Lozano, Roopa Mahadevan, and Kirsten Maxwell. For the first time ever, from October through December, all tickets on Tuesdays will be $10 (limit two per person). In its 10th year, The Public Theater’s Mobile Unit is a modern reimagining of Joseph Papp’s Mobile Theater. The Mobile Unit reaches across economic and geographic barriers to the arts by meeting our communities where they are – staging free professional theater productions and programs in local neighborhood venues such as libraries, homeless shelters, correctional facilities, and community centers across all five New York City boroughs. PUBLIC WORKS, a major initiative of The Public Theater, aims to restore and build community by connecting people through the creation of extraordinary works of art. #BARS WORKSHOP is a lab series created by Rafael Casal and Daveed Diggs that is returning to in-person sessions in the summer of 2022. #BARS went digital in October 2020 with Rafael Casal, Daveed Diggs, and Chris Walker hosting monthly online Lab sessions with incredible guest artists that were free and open to the public. PUBLIC SHAKESPEARE INITIATIVE offers a wide range of programming which includes larger Public Shakespeare Presents evenings, blending incisive commentary by scholars and other thinkers with appearances by artists of all disciplines; intimate Public Shakespeare Talks, giving audiences unique insight into the artistic and intellectual processes of leading Shakespeare practitioners working in the theater; Artist Development Programs, to cultivate some of the most visionary artistic minds working on Shakespeare today; and Education Programs, specifically the Hunts Point Children’s Shakespeare Ensemble.

EMERGING WRITERS GROUP is a long-term program that provides key support and resources for writers at every stage of their careers. It creates a fertile community and fosters a web of supportive artistic relationships across generations. PUBLIC FORUM is The Public Theater’s space where art, ideas, and action collide. Public Forum creates exciting opportunities for communities to engage deeply with current events, original thinkers, and the most pressing questions of our time. Consider becoming a Supporter to unlock early access to the 21/22 Season! Join in today with a gift of $100 or more to support theater of, by, and for all people. As thanks, you will receive savings on tickets and transaction fees, and a host of exciting benefits, for a full year.

Want Even Earlier Access? Join as a Supporter Plus, with a gift of $300 or more, for even earlier access to the season, as well as reserved seating for Free Shakespeare in the Park. Team Public, a new way to stay connected and engaged with the Public’s artists, staff, programming, events, and so much more. Team Public is part of our larger membership program. It is FREE and open to all. You will receive weekly calendar updates, downloadable content, artist spotlights, a monthly newsletter, historical fun facts, and special invitations to events and discussions. 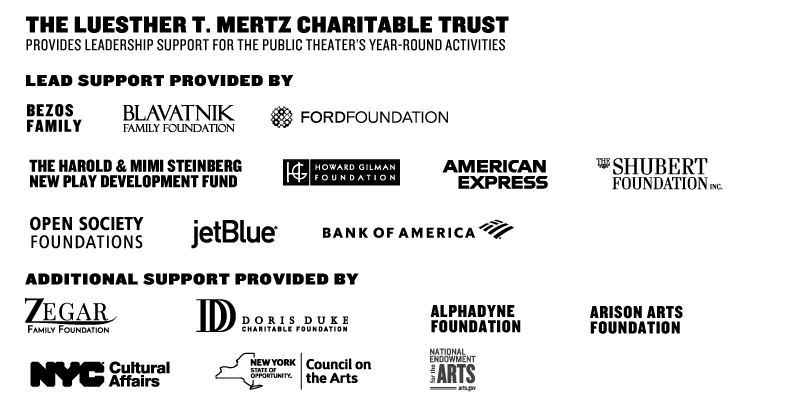