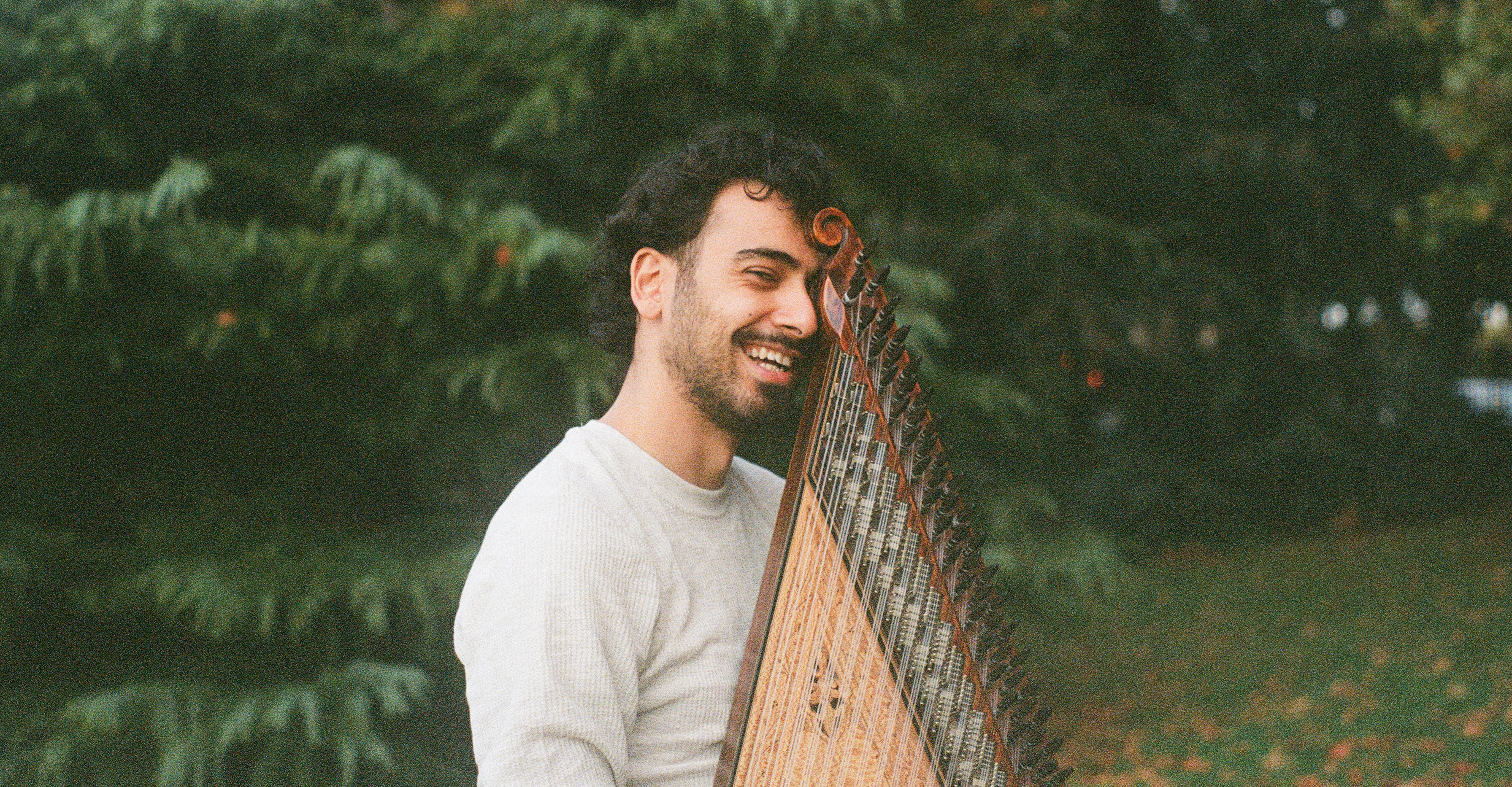 Explore the sounds of Mauritania, Morocco, Algeria, Tunisia, Palestine and more during Habibi Festival, a five-night festival immersing New Yorkers in the music of the living rooms, radios, and dance clubs of the SWANA region. From Marrakech’s all women Chaabi and Houara ensemble Bnat El Houariyat to the Moorish griot torchbearer Noura Mint Seymali to the Night in Tunisia supergroup spanning stambeli to hip hop, Habibi Festival has all you need to nurture your spirit and move your feet.

ABOUT HABIBI FESTIVAL
Created with the goal of giving a snapshot of contemporary and traditional musics of the SWANA (South West Asia North Africa) region, Habibi Festival aims to take listeners on a journey of the sounds wafting through the airwaves and living rooms of cities spanning Marrakech to Baghdad to Brooklyn. This new performing arts festival is a collaboration between the Director of Joe's Pub at the Public Theater Alex Knowlton, artist/composer/curator Yacine Boulares, and curator/producer Meera Dugal who are bonded by the goal of creating more joyful spaces for performance, conversation, and storytelling from this part of the world.

BEDOUIN BURGER (Oct 15)
Bedouin Burger are a Paris based duo seamlessly intersecting Syrian and Lebanese folk with pioneering electronica. Their thumping rhythms, stirring vocals and propulsive beats bring together the traveling souls of Bedouin nomads with the free-spirit of our fast-paced era. Made up of Syrian celestial vocalist, composer and musician Lynn Adib and Lebanese underground trailblazer, music producer and multi-instrumentalist Zeid Hamdan, Bedouin Burger come with an innovative musical sound inviting sedentary urban dwellers to swing and sway to the sometimes soulful, often nomadic, jazzy and electronic beats of the Levante, topped by a lyrical sprinkling of Arabic poetry

BNAT EL HOUARIYAT & ESRAA WARDA (Oct 11 & 12)
Bnat el Houariyat (Marrakech, Morocco) is an all-women 7 piece Moroccan Chaabi/Houara women's music and dance group lead by Khadija el Warzazia, a Marrakech native born within the laâbat tradition. “Laâbat" are women percussive groups who perform celebratory Chaabi songs at weddings and female gatherings who are known to lament and mock the common struggles of life. Khadija, from a gnawa family in Marrakech, uniquely threads in elements of Gnawa in her performance alongside her powerful band of percussionists and vocalists. An active group for over 20 years, Bnat el Houariyat has mentored the younger generation with bringing on New York based dancer Esraa Warda in 2017. They represent the power of North African women and intergenerational transmission - giving audiences permission to be free without inhibitions.

FIRAS ZREIK (Oct 13)
Palestinian Kanun player, composer, arranger, and educator based in NYC. Firas Zreik combines his deep understanding of the Maqam (the scale system in the Levantine, North African & the Mediterranean region) with elements of modern global musical styles which he absorbed throughout his musical development, creating a fresh modern authentic sound, in a dazzling technique with the Kanun at its core.  Firas is the lead Kanun player and soloist for The National Arab Orchestra, the lead Kanun player for legendary Oud virtuoso Simon Shaheen, as well as the musical director for his illustrious mother Amal Murkus and her band. He has worked with international artists ranging from Roger Waters to Bassam Saba and performed at prestigious venues across the world including Boston Symphony Hall, Lincoln Center, Carthage International Festival, Savannah Music Festival, Festival d’Aix-en-Provence, and the Smithsonian Museum.

HAT (Oct 14)
Since 2012, Hatim Belyamani – aka HAT – unites artists in an ever-evolving audio-visual dance between traditional music and digital remix art. In his one-of-a-kind live show, HAT is as an orchestra conductor from the future, beaming traditional musicians from the four corners of the world onto a big screen, and shaping them harmoniously into new electro beats. Growing up in Morocco, surrounded by sounds of the country’s Arabic, Amazigh, and Sub-Saharan African origins, Hatim was an award-winning classical pianist and guitarist before finding his voice in electronic music. In 2012, inspired to celebrate his roots, Hatim founded Remix ⟷ Culture, a non-profit organization that bridges cultural divides through the transformative power of traditional music, film, and remix. Hatim and his team traverse the globe, capturing the sights and sounds of underrepresented musical traditions, which they share for free online under a Creative Commons license. HAT’s performances are a live remixing of these videos, seamlessly blending the traditional with the experimental – acoustic trance with electronic dance – connecting his audiences to distant cultures in a unique audio-visual journey.

NOUR HARKATI (Oct 14)
Singer, songwriter, and producer, Nour Harkati is a nomad of music. Wandering through a collection of sounds, his songs weave a complex and colorful tapestry. While born and raised in Tunisia, he has spent the greater part of the past years overseas performing in Paris, Berlin, and most recently New York City. Baptized in a family of musicians, Nour yearned to expand his voice beyond customary traditions. He opened his ears to as many sounds as he could. Through his travels he experiments with new textures using music to discover the world that surrounds him. Nour sings of existence in society, doubt and mistrust, continuous departures, the lust of love, and unequivocal joy. Within these themes he delves deeper into his roots, becoming closer to himself.

NOURA MINT SEYMALI (Oct 11 & 15)
Noura Mint Seymali is Mauritania's defining artist on the international stage. Drawing on the timeless repertoire of the Moorish griot, a hereditary class of musical poet / historians, her band conjures "a full blown sandstorm of hypnotic grooves, melding traditional Mauritanian instruments within an electrified psychedelic rock band.” Expanding a sound born of Arab and Sub-Saharan roots, Noura Mint Seymali bends the arc of Moorish musical tradition to fit our contemporary moment, as described by NPR, “the arrival of Mauritanian vocalist Noura Mint Seymali in front of Western audiences feels like the start of a new era.”

YACINE BOULARES’S NIGHT IN TUNISIA (Oct 13 & 14)
Night In Tunisia is a musical journey that leads from the shores of Carthage to the port of New Orleans via West Africa where the rhythms of African-American jazz were born. In this new creation, French-Tunisian composer and saxophonist Yacine Boulares brings together a supergroup of Tunisian artists across indigenous and contemporary musical styles for an energetic and celebratory exploration of the continuum of North African and African American music. The creation is a re-imagination of the famous Dizzy Gillespie standard, “Night in Tunisia”, where Boulares invites us to go to the other side of the mirror towards an imaginary musical tale. In this tale, Dizzy would really have spent a night in Tunisia and would have been deeply imbued with its sounds and rhythms. In this project, “Night in Tunisia” is reunited with its native tongue and rhythms - the harmonies and melodies of Jazz, Soul and Funk music meet the rhythms of Mezwed, Stambeli, Chaabi, and Fazzani. Night in Tunisia is a poetic odyssey that celebrates life, the incandescent fury to dance, vibrate, and live to the rhythm of the music. At the forefront of the stage singer Nessrine Jabeur shares the mic and her poetry with rapper Mehdi WMD who are joined by traditional Tunisian percussion, drums, bass, piano/keyboard, guitar, and loutar, and band leader Yacine Boulares on saxophones.

ZAHRA ALZUBAIDI (Oct 12)
Zahra Alzubaidi is a New York based vocalist who performs a variety of Arabic styles, with a focus on Iraqi music. She has performed as a featured artist in multiple music venues throughout the US, and as a guest/chorus with ensembles such as Safaafir, Takht El Nagham, and The Brooklyn Nomads, among others. Zahra pays homage with her performances to the Southern Iraqi sound, and is dedicated to studying and researching the Iraqi Maqam and Atwar.

Born in Iraq to a big family, Zahra’s earliest influences are her family’s Chaabi wedding music, funeral recitations, and Hossat (popular southern songs to rile up crowds). It was through her older siblings, as well as Iraqi radio and television, that Zahra developed her appreciation for Classical Arabic artists such as Mohammad Abdul Wahab and the great Umm Kulthum. Later, when she emigrated to Amman in the mid-90’s, she was introduced to the Levantine music of Palestine, Lebanon and Syria. PRESENTED IN PARTNERSHIP WITH.